If you’ve got half an hour to spare, the above video features a great casual conversation between Chase Jarvis and Vincent Laforet.  There are lots of little nuggets of wisdom in here, and it’s just fun to hear the guys talk shop for a while.  You can find the full 2-hour version on iTunes as a podcast.

If you want more of the nuts and bolts of HDSLR technique, check out the recent creativeLIVE course taught by Laforet.  It’s about 20 hours of content for $149. 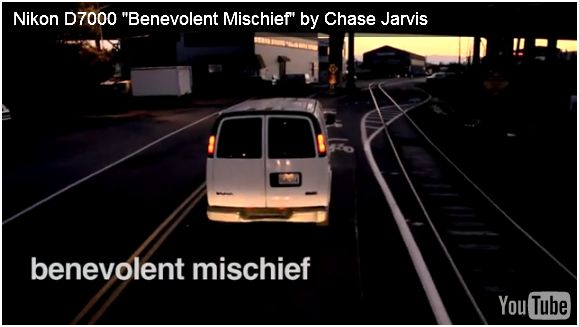 This short film from Chase Jarvis was shot with the new Nikon D7000.  Check it out below. END_OF_DOCUMENT_TOKEN_TO_BE_REPLACED

Chase Jarvis has launched a new online learning resource for photographers and other imaging professionals – creativeLive.  This is quite a bit more ambitious than Chase’s iPhone app, The Best Camera.  Like his iPhone camera though, creativeLIVE has a rather unique tilt to it, in that it’s free to watch the sessions when they are live.  If you want to watch them later, you can download individual classes for later viewing or if your schedule doesn’t permit you to be at your computer for live viewing.

creativeLIVE has an all-star cast of instructors coming up over the next couple of months, including Vincent LaForet on shooting video with DSLRs, Scott Bourne on Aperture 3, and Zack Arias on Studio Photography.  And, next week, after the CS5 launch, there’s a whole group of classes planned for learning the new stuff in the CS5 suite.

creativeLIVE looks like a great learning resource.  Hopefully, the business model will prove sound and it will be around for a long time to come.  Right now, I’ve got April 29 circled on my calender for Vincent LaForet’s class.

Trade Secret Cards has partnered with Chase Jarvis to produce a set of 22 cards that take killer images from Chase’s portfolio and couple them with a detailed “how-to” containing an explanation, diagrams and gear.

They’ve produced a run of 5000 sets of the 22 cards, which cost $21.95 per set.  Chase mentioned on his blog that he gets 10% of the purchase price; however, he’s elected to put that money back into the photo community and has given his community of followers the power to help decide how that money is spent.

You can order them at tradesecretcards.com.

You can keep track of Chase Jarvis at blog.chasejarvis.com.

Here’s a cool contest with some really cool folks involved.

Nikon is giving away $100,000 for a 140 second video about your day.  The theme is “A Day through Your Lens.”  The above video is Rainn Wilson’s hilarious take on the concept.

Of course, Nikon is promoting the capabilities of its D-Movie function on several of its DSLRs like the D300s, D3s, D5000 and D90; however, the contest is open to anyone shooting with any kind of gear.  Kudos to Nikon on that.

The winner will be chosen by pioneering photographer and filmmaker Chase Jarvis actor Rainn Wilson from NBC’s The Office, internet queen and actress “iJustine” Ezarik.  Chase seems pretty stoked about this.

You can enter at NikonFestival.com.

Check out the press release below for full details. END_OF_DOCUMENT_TOKEN_TO_BE_REPLACED

World renowned photographer, Chase Jarvis, has developed an iPhone photography App called “The Best Camera.”  You may recall that we recently covered 24 Cool iPhone Photo Apps.  In that post, there were many photo apps which applied a variety of different filters and methods to share your photos with others; however, there was no one app that took care of it all.  That was Chase’s goal in creating The Best Camera – one app to rule them all.  END_OF_DOCUMENT_TOKEN_TO_BE_REPLACED