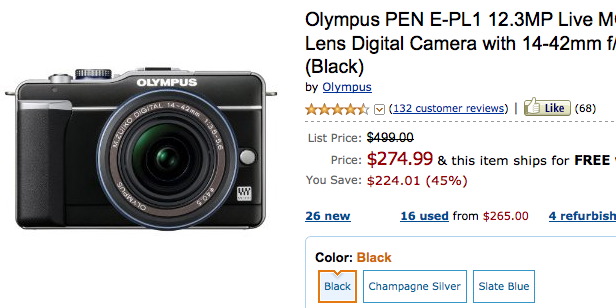 This is likely a closeout of stock, so there’s no telling how long this will last.  Note, you can also find a used, but good condition, stock of the E-PL1 at B&H for a few bucks less.

Olympus has launched an augmented reality demo for the E-PL1, which lets you demo the camera online with the help of your web cam.  When I received the email containing Total Immersion’s press release (the guys behind the augmented reality plugin), I was scratching my head a bit.  But then, I watched the below video and that better explained it (’cause it’s something you really have to see to get it – or maybe it’s just me). END_OF_DOCUMENT_TOKEN_TO_BE_REPLACED

Olympus has made available firmware updates for the E-P1, E-P2 and E-PL1 PEN Series cameras.  The new firmware updates are designed to improve the auto focus performance for still and video capture in the PEN cameras. END_OF_DOCUMENT_TOKEN_TO_BE_REPLACED

As part of my upcoming review of the Olympus E-PL1, I have spent some time capturing images in a number of different situations.  It will be a little while still before the review is complete; however, I wanted to pass along these sample images for you to check out. END_OF_DOCUMENT_TOKEN_TO_BE_REPLACED

The Olympus E-PL1 is a 12.3MP Micro Four Thirds camera that follows the original Olympus E-P1 and E-P2.  The former cameras were geared more toward enthusiast photographers, and the new E-PL1 is aimed squarely at consumers graduating from point and shoot cameras.

The E-PL1 is smaller than both the E-P1 and E-P2.  Additionally, the new camera features a pop-up flash, which is a feature that was missed by many on the previously released Olympus cameras.  The big kicker, however, is a reduced price point of $599 for the body and kit lens.  These factors combine to create a solid offering over the previous E-P1 and E-P2 cameras, and a serious option for consumers shopping for a powerful point and shoot camera. END_OF_DOCUMENT_TOKEN_TO_BE_REPLACED

The Olympus PEN E-PL1 is a 12.3MP Micro Four Thirds camera that features a number of improvements over the original E-P1.  The E-PL1 features a built-in pop-up flash, a direct record button for recording HD video, along with expected features like sensor-based image stabilization and full time live view on the 2.7-inch LCD.  The E-PL1 will be offered in a kit with a 14-42mm f3.5/5.6 zoom lens.