The Canon EOS 7D is a 18-megapixel DSLR featuring an APS-C format CMOS sensor.  At the time of its release, the 7D is situated in the EOS lineup between the 50D and the 5D Mark II.

The Canon 7D brings a number of improvements and new features to the Canon prosumer lineup.  Taking these advancements into account, Canon has finally produced a DSLR whose specs outshine its Nikon counterpart – in this case the Nikon D300s. END_OF_DOCUMENT_TOKEN_TO_BE_REPLACED

It seems like during every round of product releases over the past couple of years or so there have been rumors of a refreshed version of Canon’s popular 70-200mm f/2.8 IS and non-IS lenses.  Well, we may be in luck for a replacement soon. END_OF_DOCUMENT_TOKEN_TO_BE_REPLACED

DSLRs continue to evolve. And, this evolution will continue.  There’s no stopping it.

A few years ago, purists scoffed at chimping on the preview screen to see how exposures looked.  Then, a loud minority (of probably the same purists) cried afoul when Live View displays began showing up on just about every DSLR released.  The latest purist revolt has come as a result of the inclusion of video capture as a “must-have” feature in almost every DSLR released.

Just hop on about any photo gear forum and you’ll find plenty of critical comments concerning the latest bells and whistles attached to DSLRs.  Many proclaim that they will not buy a given camera because it has a specific feature – again, the latest villain is video.

If you think the above examples of departure from a pure SLR camera are annoying, you may very well consider the addition of a touchscreen on a DSLR to be heresy. Chris posed the question of whether photographers want a DSLR with a touchscreen (among other features) back in July.  The handful of well-reasoned comments brought up issues regarding interaction with the camera and accessibility to its features.  One commenter noted, “Just because it’s possible doesn’t make it desirable. I have one DSLR that only displays the settings on the LCD on the back of the camera; it is bulky and time consuming to take my eye away from the camera, select the setting and walk through a menu to set it.”

While the above image appears to have been produced by my 7-year-old, I can assure you that is not the case.  The image actually appears in US Patent Application No. 12/422,695, which was originally filed by Canon on April 13, 2009 and published by the United States Patent and Trademark Office on October 22, 2009.

The patent clearly exposes Canon’s implementation of a touchscreen DSLR.

END_OF_DOCUMENT_TOKEN_TO_BE_REPLACED

You knew the Canon 7D could capture video, right?  The better question is whether you know how to take advantage of this capability.

In case you missed it, Chad Mumm of Engadget posted a nice little piece on his impressions of the Canon 7D as a filmmaking tool.  Chad’s the video producer over at Engadget and he clearly knows a little more than the average bear when it comes to shooting video.  He’s also got some great advice about working with mics and sound.

His points will largely apply to the Canon 5D Mark II as well.

So, if video DSLRs are your thing, you might want to check out Mumm’s word on the 7D.

Canon has released a firmware update for the EOS 7D.  The new version 1.1.0 is supposed to address the strange ghosting issue that was uncovered last week.

Canon’s official word about the firmware:

1. Corrects a phenomenon that in images captured by continuous shooting, and under certain conditions, barely noticeable traces of the immediately preceding frame may be visible.

Carl Zeiss has released another Canon EF mount lens for EOS cameras.  The new lens is a 28mm f/2 and is manual focus only.   Additional details in the press release below. END_OF_DOCUMENT_TOKEN_TO_BE_REPLACED 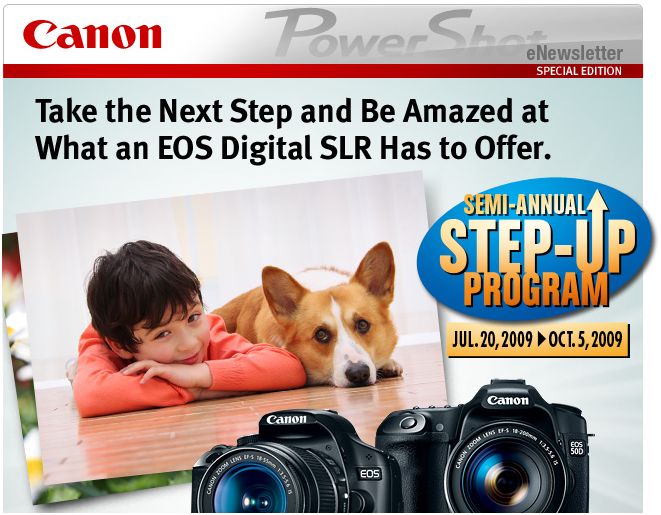 Canon has introduced their Semi-Annual Step-Up Program that is exclusively targeted toward Canon PowerShot owners.  The upgrade applies to Canon EOS DSLRs, specifically the Rebel XS, XSi and T1i, and the 50D and 5D Mark II.

PowerShot users stepping up to the Rebel XSi, XS or T1i are eligible for a $50 rebate.  For the PowerShot users looking at the 50D or 5D Mark II, you get a $100 rebate.

You can see all of the details and get the rebate form from Canon here.

I just finished an online survey for Canon owners, which they send out via email every so often.  This was a “Camera Feature Survey” and it shows that Canon is thinking hard about a Vari-Angle LCD, which is listed as the 4th item in the screen capture above.

I have included a couple of screenshots as evidence of this possible feature.  Personally, I think this is something that Canon must do – at the very least on the Rebel line.  Sony’s been there for a while and Nikon is knocking socks off with the D5000‘s tilt/swivel screen, particularly for shooting video.

PhotographyBLOG has posted a review of the Canon EOS 500D (aka Rebel T1i).

The new 15 megapixel CMOS sensor and expanded ISO range thankfully haven’t compromised image quality in any way, quite the opposite in fact.

As we saw from Canon last week, it’s clear something new in the EOS lineup is coming.  What wasn’t immediately apparent, however, is that at least 2 new DSLRs are coming from Canon.  While the “Destined Evolution” page shows the outline of one new Canon DSLR, other Canon pages offer teasers for what appears to be a different DSLR.

Canon Europe shows a flash teaser when the page first loads of what appears to be a 1-series Canon DSLR.  Note there is no mode dial on the right side.

Canon Japan shows off the same sillouhette of what we think is the 5D successor. Note the mode dial on the right side.  This appears to be the same camera from the previously reported “Destined Evolution” page.

Clearly, it’s two different cameras.  This adds credence to the 2-camera rumor of a 5D successor plus a 3D or some other higher-end camera.  Given the recent introductions of the 1-series cameras, I think the possibility of 3D camera is genuine.

Not too much longer to wait though.  Photokina 2008 is closing in.  Stay tuned for the latest.