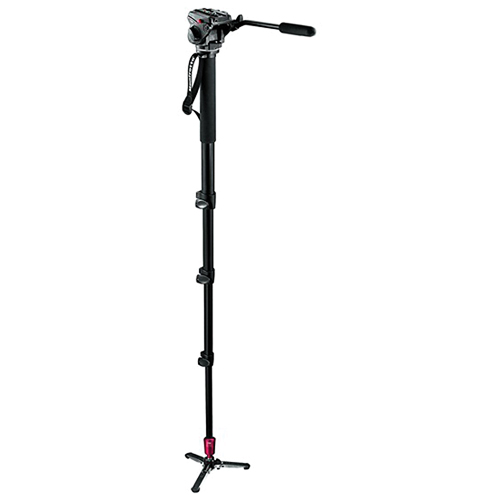 This is going to be a pretty short and sweet review; however, I wanted to get my thoughts out there for those of you interested in run & gun video stabilization setups.  When we went to CES earlier this month, we took the Manfrotto 561B and 560B video monopods with us for capturing video from the show floor.

In short, they rock.  END_OF_DOCUMENT_TOKEN_TO_BE_REPLACED

We stopped by the Argraph booth at PMA@CES for a look at their Sirui P326 carbon fiber monopod and Marumi variable ND filter.  Martin Lipton from Argraph gives us a quick rundown in the above video.

Amazon is pushing well past Cyber Monday with a whole week of deals on a variety of products.  Just browsing through today’s “Lightning Deals” – it’s serving up deals on the Tokina 16.5-135mm lens in Canon and Nikon mounts (starting at 9:20AM ET), a Benro tripod and monopod, with more to be revealed throughout the day.

If you aren’t familiar with Lightning Deals, they are limited availability products that are reduced in price (sometimes significantly) for only a short period of time (usually 1-4 hours if the stock lasts that long).  You can check them out on Amazon’s Cyber Week page and you’ll get a feel for how the deal system works.

Gitzo’s Basalt Collection of tripods, ball heads, monopod and boom.  The new line has a fiber from basalt rock to reduce weight and make it stronger.

Full details and specification are in the press release below. END_OF_DOCUMENT_TOKEN_TO_BE_REPLACED

The Gitzo G-1560 Monotrek is a lightweight monopod and hiking stick combo.  It has a small built-in ball head with a plastic cover for the head when not in use.  I recently took it with me on a 9-mile hike along with the Think Tank Photo Rotation 360 backpack.

As a hiking stick, it works well.  I generally don’t hike with such a stick, but I could be persuaded to making it a more regular practice.  I found that I really used the Gitzo G-1560 on inclines, which turned out to be quite a bit with over 2900′ elevation gain on the trip.  The grip and wrist strap are comfortable and caused no problems for me over the course of my 9-miler.

At 1.0 lb, the Gitzo is a little heavier than some of the other top-rated walking sticks out there, which are commonly in the 10-11 oz. range.  I figure that most of the difference, however, is a result of the small, yet effective, ball head that comes with the G-1560. END_OF_DOCUMENT_TOKEN_TO_BE_REPLACED

The Canon Monopod 100 is a basic 4-section monopod that comes with a ball head – all for about $33.  That’s not really a bad deal at all considering that it actually performs pretty well.

Keep in mind though that this is an entry-level product and isn’t designed for pro-level shooters who pack around 500mm f/4 lenses.  The Canon Monopod 100 just takes care of the basics. END_OF_DOCUMENT_TOKEN_TO_BE_REPLACED I picked up the Manfrotto 679B Monopod last week because I was heading to the 10 hour Petit LeMans at Road Atlanta on Saturday.  As a motorsports fan, I’ve been trying to make it to this race for the past 4 years; however, scheduling conflicts had prevented me from going – until this weekend.

Since I’ve been to Road Atlanta before and carried around my trusty Sigma 70-200mm f/2.8 lens, I expected that it might get a little heavy during a 10+ hour trek through pre-race festivities and during the race itself.  Adding a monopod to my personal kit has been long overdue.  A little shopping around proved that the 679B was probably the best bang for my buck.  Turns out that I guessed right – the 679B is a real winner. The Manfrotto 679B Monopod is built in 3 sections, two of which are telescoping via thumb-latches located at the top of the two lower sections.  The 679B features a 1/4″ and retractable 3/8″ screw attachment for attaching your camera or lens collars.  The Sigma 70-200mm f/2.8 lens comes with a detachable collar, which attaches securely to the 1/4″ screw and really balances well on the monopod.

The rubber foot on the 679B is thick and robust, providing a solid footing on all the surfaces I encountered.  It’s now more of a red color than the black rubber due to the vast quantity of red clay around the track at Road Atlanta.

Fully extended, it reaches about 63.5″, which I found to be about right in most situations. (I’m about 6’0″) Granted, there were a few instances where I could have used an extra inch or so due to the downslope that I was standing on.  If you were inclined to add a tripod head to it, then you’ll get a little extra reach out of it. A tripod head would also allow you to adjust the angle to your liking.  However, I found the tripod collar on my Sigma 70-200mm lens to permit sufficient maneuvering of the lens – such that a separate head would be unnecessary and probably more cumbersome for the subjects I was shooting.

There’s nothing really sexy about the Manfrotto 679B Monopod – it just works.  It’s well built but still relatively light and compact.  It can support up to 22 pounds per the specs – I bet it would hold more just fine.  As a tool, the Manfrotto 679B can really make your job easier and help you produce better pictures through a much cheaper image stabilization system than you’ll find in high-priced pro lenses.

In short, I’ve got nothing but praise for this light and affordable monopod ($45-50).  If you’re in the market for a monopod or plan on shooting a sporting event for an extended period of time, the Manfrotto 679B Monopod deserves some serious consideration.

Most of your serious photography retailers will carry the Manfrotto 679B Monopod.  I recommended shopping at Amazon, Adorama and B&H Photo.  These are the trusted online vendors where I personally shop for almost all of my photography gear.