Several online vendors are already taking orders for the new Nikon D300s and D3000.  Others are offering in-stock notifications.

You can pre-order or sign up for notifications at the vendors listed below.

The Nikon D300s is a refreshed version of the Nikon D300 that offers video capabilities and other tweaks to the previous model. 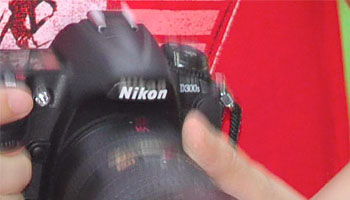 A couple of updates on the Nikon D300s.

Nikon rumors reports they have confirmed the July 30th announcement for the Nikon D300s (and the D3000).

The above image is purported to be a spy shot of the Nikon D300s, captured by a Pinoyphotography.org forum poster.  [Nikon Rumors via Neutral Day]

Expect more as the week goes by…

Is this the camera that is set to replace the Nikon D300 soon?   Since we’re inching ever closer to the Nikon D300s official announcement, we should all be expecting more and more leaks.  The latest leaks, courtesy of Nikon Rumors, come in the form of some up close and unobstructed images of the possible new camera.

This above image is definitely not the same Nikon D300s camera in the image that was leaked previously.  Compare the mic holes in the two:

So, one of the two “leaked” images is fake for sure.  More photos of the current “leak” follow. END_OF_DOCUMENT_TOKEN_TO_BE_REPLACED

The forum poster lays out a number of Nikon DSLR bodies and lenses, along with purported release dates for 2009 and 2010.  Here’s the summary version of the possibly leaked roadmap: END_OF_DOCUMENT_TOKEN_TO_BE_REPLACED

Above is a possible leaked picture of the Nikon D300s, which we pretty much know is a sure thing.  Whether the image is real or not, however, is still up in the air. END_OF_DOCUMENT_TOKEN_TO_BE_REPLACED

Several tips and rumors have been flowing in over at Nikon Rumors concerning an update to the D700, which tipsters are calling the D700x.  This camera has been in the rumor mill since before the D3x was announced and many Nikonians have lusted after the thought of a D700-like camera body packed with a D3x-type sensor.

“I was at *** 2009 show earlier this year in ***, and was asking a staff member on the Nikon stand about the D700 replacement/upgrade. I was told whatever replaces it will be released in October/November 2009, but they would say no more than that.”

“My D300 is in for service at Nikon (bad aperture control module) and I asked the tech when a new dslr was being released and which one. He responded with the D700x this fall. A 24mp replacement for the D700.”

While such a camera might make sense when looking at the Nikon D700’s biggest competitor (Canon 5D Mark II), it doesn’t really fit into Nikon’s lineup very well.  As posited by Nikon Rumors, a Nikon D700x with a  12.3 megapixel sensor that also captures video and can do a few new tricks seems to be the most likely D700 replacement for this fall anyway.  As such, it would fit nicely with the all-but-official Nikon D300s, which we expect around the first of August.

Kamera & Bild passed along that Nikon has a couple of press conferences set for July 30 and August 4.  K&B further alludes to the announcements of, not one, but two new DSLRs from Nikon.

We know that rumors of a Nikon D300s have been running rampant lately, so there’s one.  What’s the other?

Some say a Nikon D4000 is in the works to replace the D60, as a non-video DSLR.  Other rumors suggest a D4 or D3s (or some other refreshed version of the D3).  Both rumors make a little sense.

Another possible explanation for the two dates would be a release of a plethora of point and shoot cameras, which seems to happen twice a year, at the first press conference.  All the while, the second press conference is for the Nikon D300s and maybe a handful of lenses.

One thing’s for sure . . . expect plenty of leaks and more rumors between now and July 30.

Anyone else have word on what, when and where?

This video shows off some possible press material of the Nikon D300s, which is expected to be the successor to the Nikon D300. If this is legit, it means that the D300s is likely right around the corner…

This image showing the LCD screen of what is clearly a Nikon D300s was purportedly taken from the official Nikon USA site (it’s down now).  The LCD screen cap shows the Nikon D300s model name, as well as an indication that it has an SD slot via the info in the lower left corner.  These validity of this rumor just increased to all-but-official and we should be seeing a replacement for the Nikon D300 anytime now.