Thom Hogan is feeling pretty confident on his information and has posted what are believed to be the actual specs of the new Nikon D90, which is expected to be announced shortly.

The Nikon D90 will feature the following specs:

Clearly, Nikon is aiming to one-up the previous generation DSLRs with specs like these.  The video capture will surely be a big selling point in the consumer market.

I’ll withhold my thoughts for know, but I want to know: What do you think about video capture in the Nikon D80 replacement?

Thom Hogan may be having a little fun with us based on info that he’s received from sources within or close to Nikon.  In a recent forum post, Thom threw out some numbers while discussing the rumored Nikon D90.  These were tossed around by Thom in response to a silly lottery number question.

While it may seem rather trite, Nikon Rumors has read a little deeper into these and given us their interpretation of the winning numbers:

I think Thom is enjoying himself (and probably passing along good info too).  Kudos to NR for reading between the lines.  I remain a bit skeptical on the 1080 video “recording”.  I would expect if that number is for real it has to do more with the interface and compatibility with high-def devices – much like Sony has done in recent history.

The rumor mill is in full swing after the announcement of the Nikon D700. A poster on DPR, claiming to have “inside” info has posted “spoiler” specs of the Canon 5D Mark II. With a big grain of salt in hand, take a look at the following info:

As you can see, it’s by no means ground-breaking. It’s not going to out-do the Nikon D700 in performance or features (although overall IQ will be very close or indistinguishable). But it will be significantly cheaper. It’s aimed at the more “manual” shooter.

Original 5D will continue to be sold at $1,799.95 (SSP) without any rebates until stock is depleted.

Jacobs Digital Photo and Video is touting a major announcement is coming on July 1st.

Everyone likes surprises, well we have one !! There will be a big surprise on the 1st July 2008, a major supplier will be announcing a brand new SLR. KEEP WATCHING ! 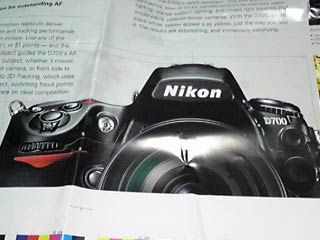 This appears to confirm the prior rumors and speculation regarding an announcement from Nikon on July 1st. The rumors had previously been linked to a coming D3X; however, in light of the recent leaks, my money is on the Nikon D700. Additionally, note that Jacobs points out that “a” new SLR is coming, indicating only one new model, instead of the trio from Nikon we have been expecting. Perhaps Nikon will save something nice for Photokina 2008.

Also, I could always be wrong. Jacobs clearly has better info that I do at the moment, so maybe Canon has something up their sleeve with a Canon EOS 5D Mark II model? One things for sure, we’ve got about a week and a half to wait on the “surprise” announcement.

Rumor has it, that is Nikon Rumors has it, the Nikon D90 may be announced by Nikon D90. Nikon Rumors has published the above photo, which looks like a “press” image and bears too many differences from current models to be a Photoshopped job. (I will say, however, that the “9” on the badge looks a little jacked up.)

June 16th is significant because of Thom Hogan’s prior predictions for the release of a D90 and D3x from Nikon:

I’m tightening my D90 (or whatever they decide to call it) prediction date to between May 12th and June 16th.

If you’re interested in seeing a dissection of the above Nikon D90 image compared to other current Nikon DSLRs, check out Nikon Rumors for more.

Finally, for the latest news and rumors on the Nikon D90, stay tuned to Photography Bay’s Nikon D90 page.

UPDATE:  Sorry for the false alarm folks, but after further inspection, this is clearly a PS job based on the below image of the Nikon D300.  Look closely and you’ll find the similarities as well.  Pretty good PS job though, it had me pondering for a bit.

Rumors are really starting to heat up on a variety of cameras.  A DP Review forum member alleges that he has “reliable” info on an announcement from Nikon regarding the Nikon D3x on July 1, 2008.

Stay tuned to the Nikon D3x Rumors page for more.